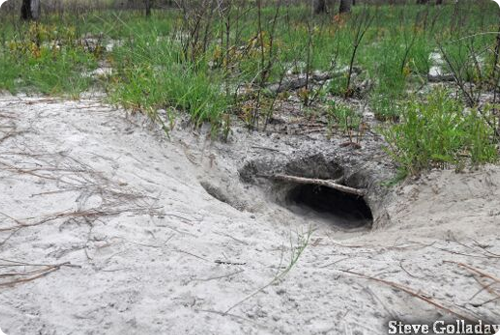 The life of a gopher tortoise revolves around a tunnel-like burrow that is excavated using its shovel-like front feet. Burrows can be up to 40 feet (12 meters) in length and 10 feet (3 meters) in depth. Each burrow has a single opening and the width of the burrow is approximately equal to the length of the tortoise. Therefore, the tortoise is able to turn around at any point within the burrow, and consequently, burrow width is a good indicator of the size (and approximate age) of the tortoise. Gopher tortoise burrows are usually easy to spot in the landscape because of the characteristic mound of loose sand at the burrow entrance (called the “apron”).

Gopher tortoise burrows remain at a fairly constant temperature and humidity level year-round, thus providing shelter for the tortoise during periods of extreme temperatures, drought, and fire. Tortoise burrows also afford refuge to other animals including more than 360 animal species. The list includes the indigo snake, pine snake, gopher frog, Florida mouse, opossum, armadillo, burrowing owl, gopher cricket, scarab beetles, and many others. Some, such as the Florida mouse, cannot exist without the tortoise burrow.

Gopher tortoises feed mainly on low-growing plants that require abundant sunlight. Although grasses and legumes make up the bulk of their diet, gopher tortoises eat a large variety of herbaceous plants including gopher apple, pawpaw, blackberries, saw palmetto berries, and other fruits. If you have gopher tortoises living on your property, landscaping with native plants will ensure that proper food is available. A link to a list of Gopher Tortoise forage plants can be found here. 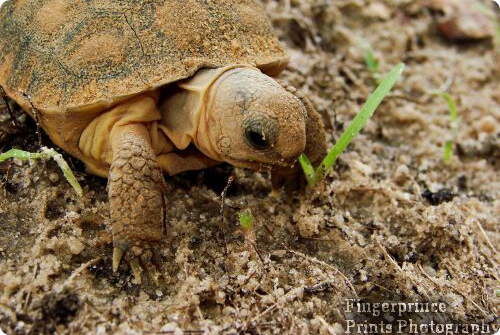 Gopher tortoises are thought to live in excess of 60 years. They grow relatively slowly and growth rates vary by geographic region. For example, in northern Florida, female tortoises reach adulthood at 10 to 15 years of age, when the shell length is about nine inches (225-235 millimeters); in southwest Georgia, tortoises may take 21 years to mature. Adult female gopher tortoises are slightly larger than males, and at maturity, male tortoises can usually be distinguished from females by a concave lower shell (plastron).

Hatchling gopher tortoises may use an adult burrow or dig a small burrow of their own. Young gopher tortoises are vulnerable to predation until their shell hardens at about 6-7 years of age. Raccoon, indigo snake, black bear, and red-tailed hawk, among others, eat hatchlings and young tortoises. Adult tortoises have few enemies other than humans, although domestic dogs and raccoons are known to eat them.

Gopher tortoises typically breed from April to June, but males may attempt to mate into the late summer or fall. During May and June, female tortoises lay 3-15 eggs, either in the sand mound in front of the burrow or in another nearby sunny place. The incubation period for eggs varies from 80 to 90 days in Florida to more than 100 days in Georgia. A mature female generally produces one clutch of eggs annually. Nest predation can be quite high and an individual female may produce a successful nest as infrequently as once in 10 years. Nest predators include raccoons, foxes, skunks, armadillos, and fire ants.