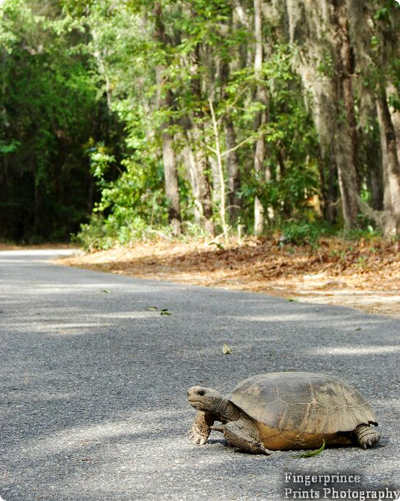 The gopher tortoise is declining throughout its range. Some researchers have projected that unless something is done to reverse this decline, this species may soon be found only in protected areas. Why is the gopher tortoise in trouble?

Habitat alteration and land development pose the most serious threat to the continued survival of the gopher tortoise. Both people and tortoises like to live in high, dry areas. In addition, phosphate, limestone, and sand mining have destroyed countless acres of tortoise habitat, particularly in central Florida. Tortoises living on proposed development sites are sometimes relocated to another area; however, careful consideration needs to be made as this can result in the spread of disease and may disrupt resident tortoise populations. Relocated tortoises rarely stay at the new site and many are killed crossing roads as they attempt to navigate back to their original range. However, techniques are available to reduce mortality of tortoises as a result of relocation efforts. In Florida, temporary enclosures are required to increase the site fidelity of relocated tortoises.

Although the forestry industry contributes a great deal to the protection natural areas in the southeastern United States, some forestry practices can be harmful to gopher tortoises. For example, if pines are planted too closely, insufficient sunlight reaches the ground, which limits the growth of plants that the tortoises depend on for food. In addition, female gopher tortoises may be unable to find open sunny sites for nesting. Intensive site preparation also can harm gopher tortoises by destroying burrows and nests. However, forestry practices such as tree thinning and the use of prescribed fire can be beneficial to tortoises. These practices open up the tree canopy and allow sunlight to reach the forest floor with minimum soil disturbance, thus encouraging the growth of grasses and other gopher tortoise food plants. Hand-planting of trees and low intensity site preparation also lessen negative impacts to tortoises. The American Forest Foundation published the “Pine Ecosystem Conservation Handbook for the Gopher Tortoise” which can be found here (pdf).

There is little information regarding the diseases of wild tortoises. However, an upper respiratory tract disease (URTD) has been observed in desert tortoises in the western U.S. and in gopher tortoises in Florida, Georgia, and Mississippi. This disease is highly contagious and is transmitted by close contact between tortoises. Clinical signs of URTD include a clear or white nasal discharge, watery eyes, and swollen eyelids. Tortoises can be “silent carriers”, meaning that they have the disease but do not exhibit obvious signs. Mortality from this disease has been high in some desert tortoise populations, but little is known about the effect of the disease on gopher tortoise populations. The occurrence of URTD is a significant concern in regards to gopher tortoise relocation and restocking programs. There is always the threat that diseases can be introduced into established colonies when tortoises are relocated onto new sites. Captive tortoises, in particular, should not be released back into the wild. It is believed that the release of sick, captive tortoises may have been a factor in a 90% decline of desert tortoises on one California preserve.

Tortoises were a reliable source of food during the Depression, when there was little else to eat. Of course, these so called “Hoover chickens” were much more plentiful 70 years ago. Currently, tortoise harvesting is illegal in every state where tortoises are found. Unfortunately not all states enforce tortoise protection laws. Even after the harvest of tortoises was prohibited in Florida, illegal hunting depleted or destroyed tortoise colonies to supply the demand for gopher meat. Gopher tortoises do not reproduce at a rate that can withstand harvest.

Additional factors believed to be harmful to gopher tortoises include the broad scale the use of herbicides and pesticides, the release of exotic pet tortoises, and predation by domestic dogs.